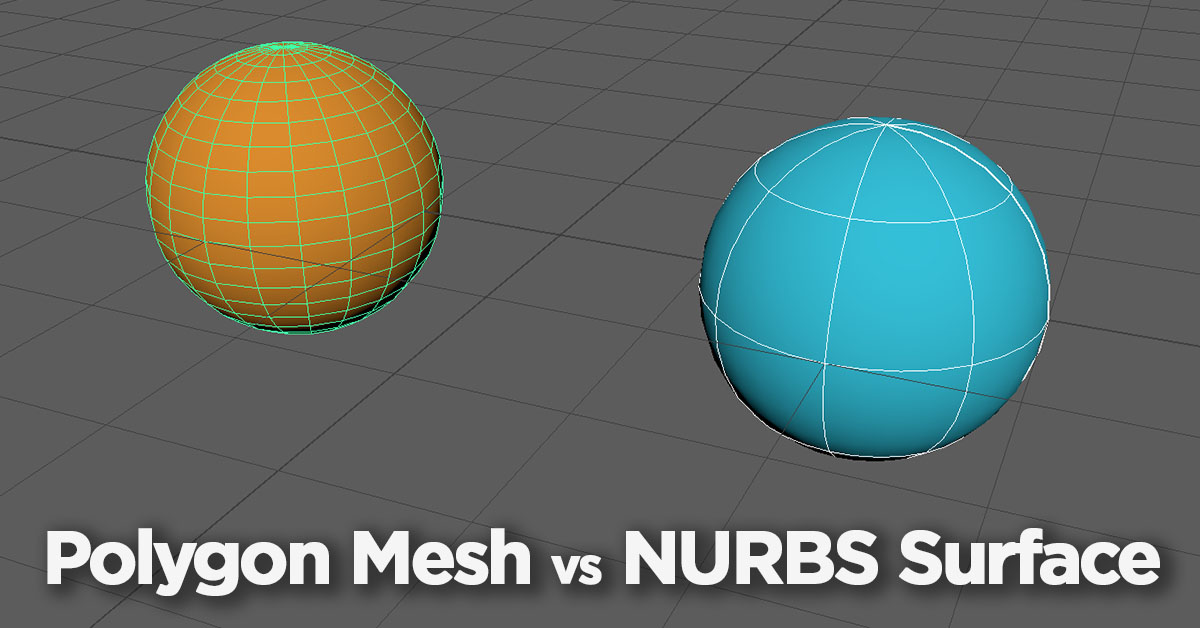 3D Modeling uses three-dimensional production software to construct a model with three-dimensional data through a virtual three-dimensional space. Under normal circumstances, it can be divided into: Polygon Modeling, Parametric Modeling, Reverse Modeling, Surface Modeling (NURBS Modeling), etc., according to different industry needs. Different modeling methods have different characteristics and different functions.
It is not easy to say which the modeling method is good, the different modeling methods will apply different industry uses. For example: Industrial modeling requires precise dimensions, so parametric modeling is very important. The visual animation required by the entertainment industry does not have such high requirements for precise parameters.
Below will be discuss the comparisons between Polygon Mesh modeling and NURBS Surface modeling, they are popular to be used in the 3D CGI industry.

Technically, Polygon Modeling is one of the more popular modeling methods in 3D software. Polygon modeling objects are generally composed of Vertex (point), Edge (edge), Face (face), and Element (overall element-body). Two points form a side, four sides can form a surface, and multiple surfaces can form a volume. This is the principle of polygon modeling. Polygon refers to a face that can support N sides. The minimum is that three sides form a face (less used-triangular face), and four sides form a face (commonly used-four-sided face), which is larger than a face composed of four sides (N side surface).

Polygonal modeling: Generally, a complete model is composed of many regular four-sided faces.
Its fast and editable feature is very suitable for modeling requirements that do not required high accuracy. It is mostly used for visual animation, film and television, and game modeling. Most entertainment 3D software comes with a polygon model module. Nowadays, the polygon editing system is all-around. The polygon modeling system in most of 3D software is similar.

Surface modeling (NURBS Modeling) is the abbreviation of Non-Uniform Rational B-Splines, meaning “non-uniform equipartition has rational B-Splines”. Technically, The specific explanation is: Non-Uniform (non-uniform) means that the range of influence of a control vertex can be changed. Simply, NURBS is a modeling method that specializes in making curved objects. NURBS modeling is always defined by curves and surfaces, so it is very difficult to generate an angular edge on the NURBS surface. The curved surface is composed of a curved surface, and the curved surface forms a three-dimensional model. The curve has control points to control the curvature, direction, and length of the curve. In generally, the creation of a surface starts with a curve. Curves can be created by points to create surfaces, or surfaces can be created by extracting or using existing feature edge lines in the viewing area.

To use NURBS surface model, firstly create the curve. You can use the measured cloud points to create a curve, or you can outline the user’s desired curve from the raster image. According to the created curve, the main or large-area surface of the product can be created by using options such as curved, ruled, curved mesh, and sweep. Use rendering software to add materials and environmental backlighting, etc., and finally get the renderings.

Surface modeling: NURBS Modeling is very suitable for creating smooth objects, such as digital products, cars, etc. But the shortcomings of this kind of modeling are also obvious, not only difficult but also difficult to accurately parameterize. The NURBS modeling method is not eliminated, but it is inferior to Polygon Modeling in term of efficiency and Parametric Modeling (including surface modeling method) in terms of accuracy, so NURBS will be used more in visualization , which is the final mainly product renderings of video performance.

Thank you for reading. Hope this can help!
by artist.B
Continues Reading : 5 Essential Steps to Create 3D Product Rendering, for every 3D artist must know these
Welcome to share with your friend through below buttons.
by cgian.com